1880s were marked by the construction of People’s Houses in St.Petersburg – clubs that offered cultural entertainment and education to the average intelligentsia, minor officials, students, soldiers, workers. About twenty People’s Houses were operational by the start of XX century. 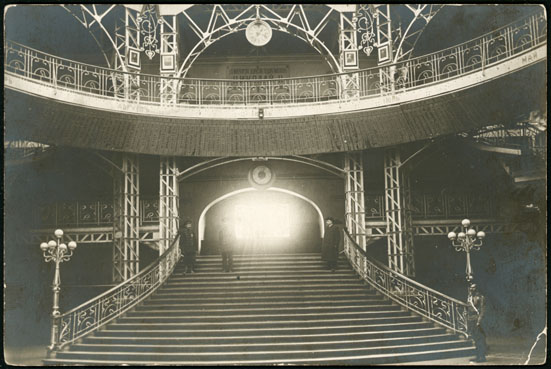 The biggest People’s House was built in 1900-1912 on Kronverksky Prospect in Alexander Park of Petrogradsky district. On 12th December 1900 the People’s House was grandly sanctified and named People’s entertainment establishment of emperor Nikolay II. In 1932 this theater was burned and another building replaced it. Nowadays it houses Baltic House Theater, Planetarium and a part of Music Hall (ticket offices, lobby).

In 1912 People’s House got an addition in the form of the newly-built “pavilion” which was called Audience hall and people’s auditorium named after his Highness prince A.P. Oldenburgsky. The hall was designed and functioned as an opera hall for People’s House.

Opera Hall seated 2800 including amphitheater with 728 seats, 76 lodges and three circles. New Opera Hall became one of the most spectacular theaters of the world. It opened on 4 January 1912 with Glinka’s opera A Life for the Tsar. 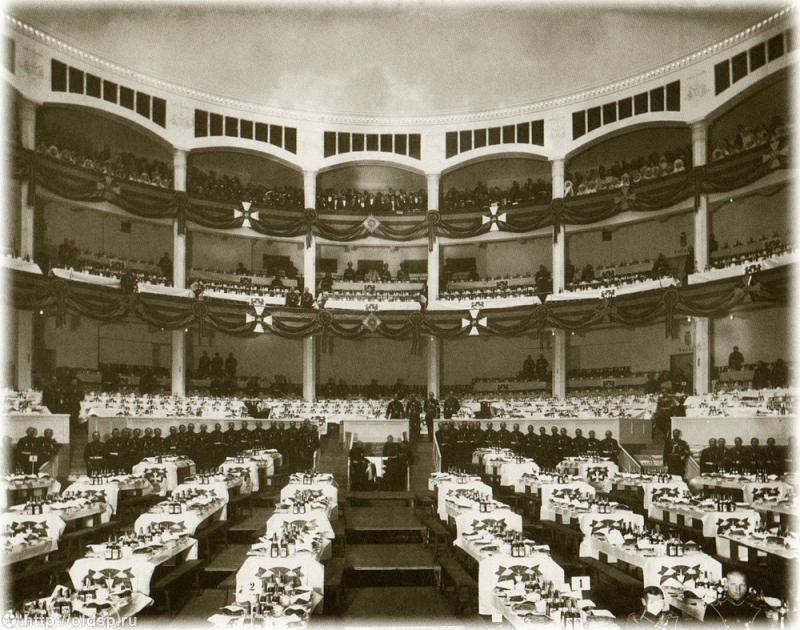 United People’s House of Nikolay II had three groups – drama (which performed at the first theater), opera and ballet, which performed at new Opera Hall. Theater part was headed by producer of historical plays and extravaganzas A.Y. Alexeev. Director S.M. Ratov, who replaced him in 1909, renewed the repertoire by adding serious modern plays into it. 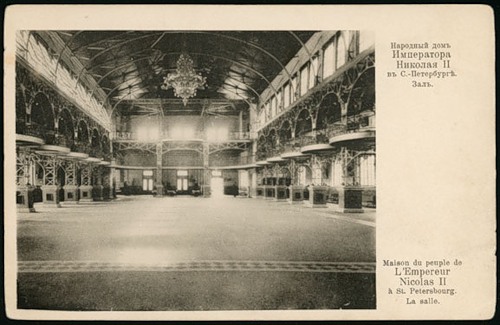 1910-1915 saw famous tenor Nikolay Figner as the opera director; he used to be the leading singer of Mariinsky Theater, but had left it by that time and started new theater. Once the director, Finger involved A.A. Sanin, an alumnus of Moscow Art Theater, in his newly-created opera troupe. Figner and Sanin aimed at creating a directorial opera theater in People’s House. In 1915 Figner left the opera troupe of People’s House.

Guest stars, such as L.V. Sobinov, M.N. Kuznetsova-Benois,               M. Battistini and others performed on the stage of Opera Hall alongside with the singers of the People’s House of Nikolay II. Joined work with F.I. Chaliapin marked a whole era for People’s House; he acted not only as a leading soloist here, but also as a director.

After Chaliapin had signed an agreement with the entrepreneur A.R. Aksarin, People’s House became Chaliapin’s official stage in 1913-1917. In People’s House Chaliapin sang the part of Philippe II in Don Carlo opera by G. Verdi, the part of Don Quixote in the same-name opera by J. Massenet, who wrote his masterpiece with Chaliapin in mind. It was here that Fedor Ivanovich performed the part of Yeryomka in The Power of the Fiend opera by A.N. Serov. 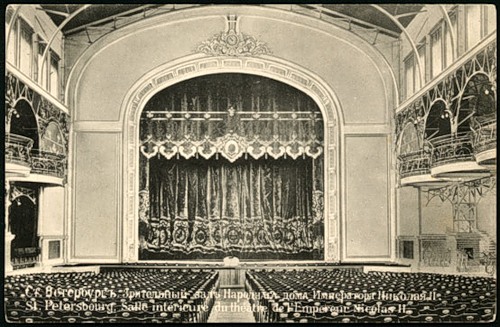 After the February Revolution of 1917 People’s House came under the jurisdiction of the State Duma. Over that period its halls had become the place for mass gatherings. Opera Hall hosted 1st All-Russia Congress of peasant delegates, where V.I. Lenin made a speech on agricultural issue on 22 May 1917. (This was the reason for the Music Hall building becoming the Federal Monument of history and culture based on the resolution of Council of ministers of RSFSR #1327 from August 30, 1960). In 1919 Petrograd People’s House was given the name of Karl Liebknecht and Rosa Luxemburg. One year later the building came under the jurisdiction of People’s Commissariat of Enlightenment.

5 May 1928 was the day of Klavdiya Shulzhenko’s debut performance on the stage of People’s House. Its success exceeded all expectations. (Some time later, after the official opening of Leningrad Music Hall, Shulzhenko became its regular actor.)

On 5 December 1982 Leningrad Music Hall opened with the premiere of The Wonders of XX century or The Last Carrier (directed by David Gutman) in Opera Hall of People’s House.

The first Leningrad Music Hall, founded in 1928, became very popular thanks to the work of I.O. Dunaevsky and Thea-jazz of L. Utesov. Since 1929 Dunaevsky had become music director and principal conductor of the Music Hall. The group had produced several variety song programs where L. Utesov and K. Shulzhenko were the leading singers.

In 1938 according to the decree of Council of People’s Commissars Arts Committee #412 former Opera Hall of the People’s House housed the branch of Opera and Ballet Theater named after S.M. Kirov. The branch didn’t have much success. Kirov Theater wasn’t able to actively use this site. The building of the branch of State Academic Opera and Ballet Theater named after S.M. Kirov was transferred to the department of Cinemafication according to the resolution of Leningrad City Council Executive Committee 11/10/1948 #49, - under the jurisdiction of Giant cinema. 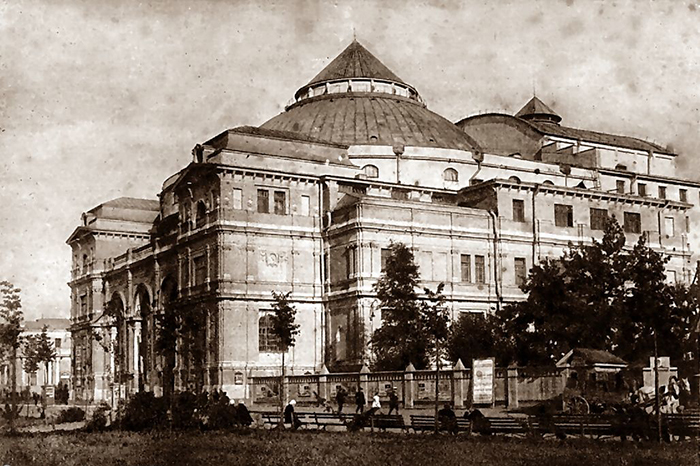 In 1966 the second Leningrad Music Hall was opened in Leningrad. It operated under Ilya Rakhlin. In 1966-1988 Music Hall was housed in City Council Palace of Culture, which staged all theater premiers.

In 1967 Leningrad State Theater Music Hall showed its first performance to the public – revue Nobody is more beautiful than you staged by Ilya Rakhlin. Since its first production and for many years to come Music Hall has played a prominent part in cultural life of the country. The orchestra was conducted by Stanislav Gorkovenko, choreographic group was directed by choreographer Ilya Gaft and ballet master Igor Belsky. Music was written by such composers as M. Kazhlaev, A. Zhurbin, S. Pozhlakov, D. Tukhmanov. Soon after the opening of Music Hall a studio was created and it educated many generations of pop performers. It is enough to know that Music Hall troupe and studio trained Sergei Zakharov and Philip Kirkorov, Tatiana Bulanova and Marina Kapuro. Theater has had such people among its members as Muslim Magomaev, Edyta Piecha, Iosif Kobzon, Ben Bentsianov, Albert Asadullin, Viacheslav Polunin, Sergei Rogozhin, Yuriy Galtsev, Gennady Vetrov, beat quartet Secret and other famous performers.

Over 30 programs have been created since 1967 - Nobody is more beautiful than you, Vologda lace-makers, A million of newly-weds, From all my heart, Baltic wind, Always by my side, Housewarming and others. Ilya Rakhlin was the creator, script-writer and producer in all these performances.

Reporters wrote that each performance of I.J. Rakhlin was a very original stage creation, an alloy of arts unlike anything else, created with high professionalism, brilliant figurative findings combined with amazing costumes, backdrops and lighting effects. I.J. Rakhlin called Music Hall the theater of all genres, which are combined in a musical performance based on a plot.

Under the management of Ilya Rakhlin Music Hall has gained fame not only in Russia, but also abroad. While touring France, Italy, the USA, Japan, Greece, Mexico, Australia, Germany and many other countries members of the theater have become acclaimed worldwide.

Music Hall performance opened the silver (25th) season in the famous hall Olympia in Paris. The performers of Leningrad Music Hall were the first to perform in new concert halls Russia in Moscow and Oktyabrsky in Leningrad.

In April 1987 I.J. Rakhlin opened a studio for children, which still operates in the walls of the Theater. 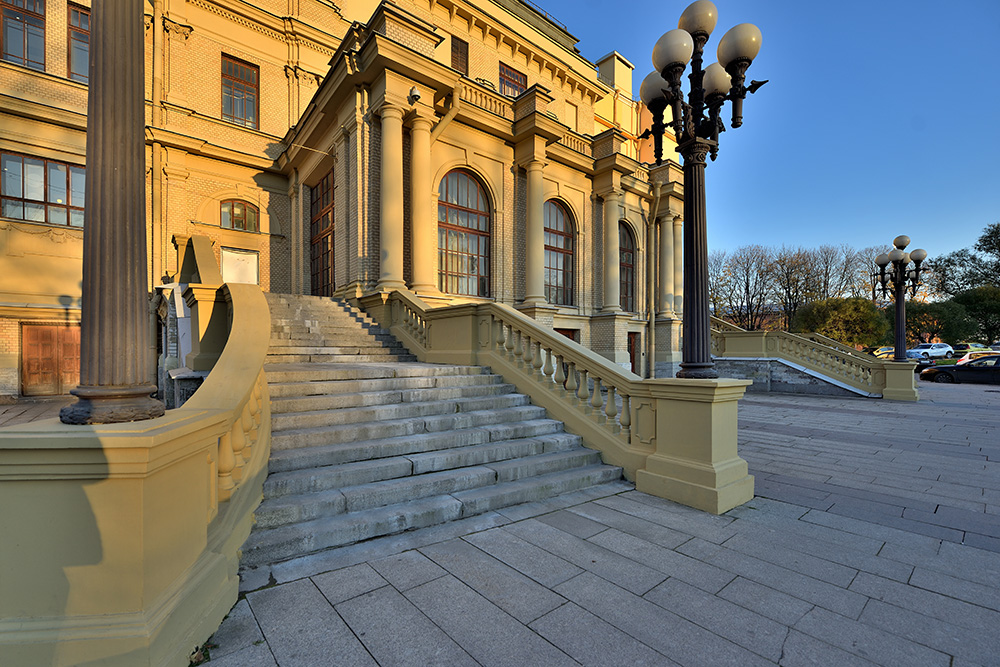 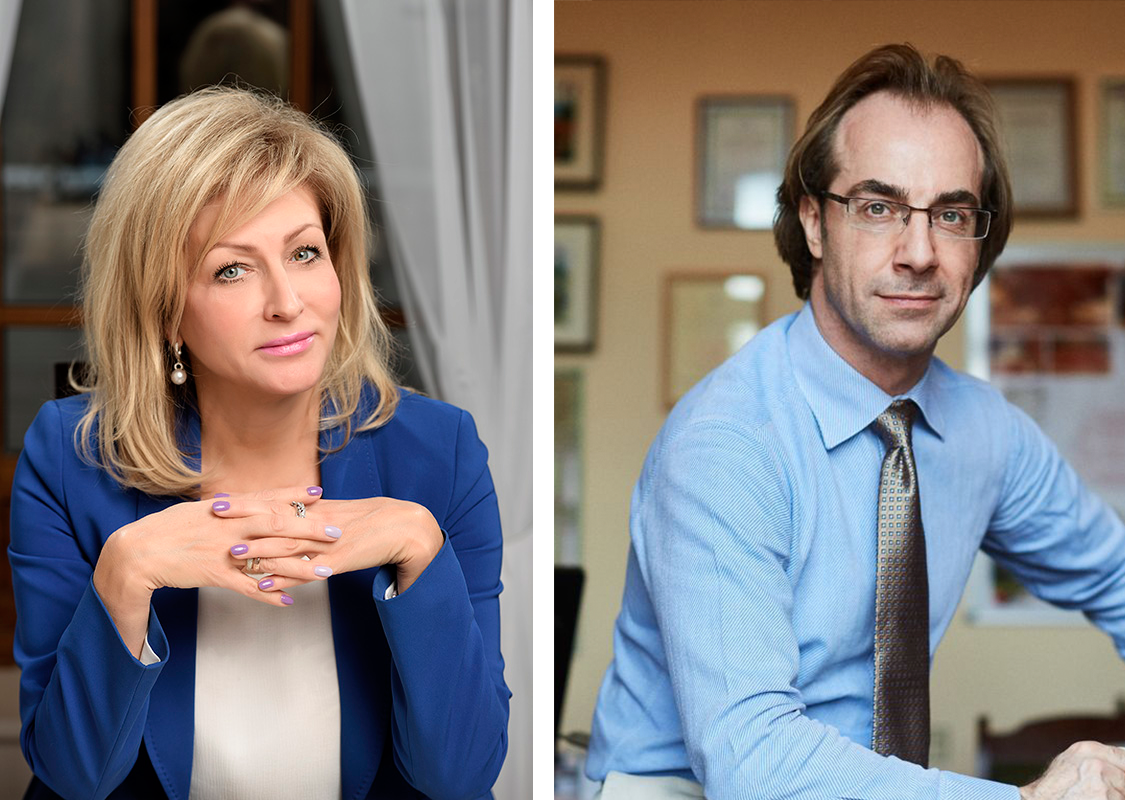 In August 2013 famous musician, conductor Fabio Mastrangelo was appointed Artistic Director of the Theatre. In September 2014 Julia Strizhak became Director of the Music Hall Theatre. Currently, the Music Hall Theatre offers impressive musical performances for the entire family such as musical Alice's Adventures in Wonderland, The Bremen Town Musicians,  Mary Poppins is with Us, Winnie-the-Pooh and All, All, All and Cipollino. Musicals based upon famous literary works including The Picture of Dorian Gray and The Great Gatsby have been staged for adult spectators.

In autumn 2018, a premiere of the Gaetano Donizetti’s opera Don Pasquale was held at the theatre. During operation of the People's House of Nicholas II, the theatre showed operas regularly. A grand opera hall opened here on 4 January 1912 with performance of the opera A Life for the Tsar by M.I. Glinka. So, the crucial musical genre has returned to the Music Hall Theatre’s stage after a little more than 100 years.

Currently, the Music Hall Theatre offers impressive musical performances for the entire family such as musical Alice's Adventures in Wonderland, The Bremen Town Musicians,  Mary Poppins is with Us, Winnie-the-Pooh and All, All, All and Cipollino. Musicals based upon famous literary works including The Picture of Dorian Gray and The Great Gatsby have been staged for adult spectators.

In autumn 2018, a premiere of the Gaetano Donizetti’s opera Don Pasquale was held at the theatre. During operation of the People's House of Nicholas II, the theatre showed operas regularly. A grand opera hall opened here on 4 January 1912 with performance of the opera A Life for the Tsar by M.I. Glinka. So, the crucial musical genre has returned to the Music Hall Theatre’s stage after a little more than 100 years.

Music Hall Theatre organizes St. Petersburg International All Together Opera Festival, an annual city-wide event, which has been attracting great interest of St. Petersburg’s residents and visitors for many years. The festival acquaints the audience with notable masterpieces of foreign and domestic classical operas in the open-air format. Admission to the performances is free. Residents and guests of St. Petersburg can see performances of the most popular operas of the world repertoire absolutely free. The festival All Together Opera presents its productions amid the most beautiful architectural ensembles of St. Petersburg, fully engaging them in the stage action.

The Music Hall Theatre organizes a festive gala concert as a part of opening of the Singing Bridges Festival on the occasion of the City Day. For as much as two consecutive years, the start of a unique lights celebration and the City Day has been accompanied by The St. Petersburg Northern Sinfonia Orchestra of the Music Hall Theatre led by Fabio Mastrangelo. The concert program includes works by the famous Russian composers. As soon as the Palace Bridge begins to be raised, The Northern Sinfonia Orchestra performs Hymn to the Great City. At this point, St. Petersburg becomes illuminated with fire lights of the Rostral Columns, which are a solemn symbol of the city on the Neva. The text is given to everyone who asks for it, so that they can sing the St. Petersburg anthem in a festive atmosphere. A vast number of tourists and guests of our city view the raising of the bridges as a symbol of St. Petersburg and a must-do of the cultural programme. The Singing Bridges Festival is meant to be a new art tool, enhancing the impression of a spectacle of the bridges raised and helping feel the spirit and atmosphere of the Northern capital wholeheartedly.