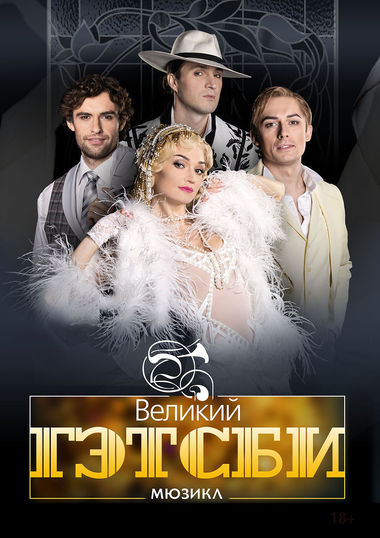 (based on the novel of Francis Scott Key Fitzgerald)

On 18 and 20 October a premiere of the musical «The Great Gatsby», based on the Francis Scott Key Fitzgerald’s novel of the same name, will be held at the Big Stage of the Musical Hall Theatre. Composer – Prize Winner at the International and All-Russian competitions Vladimir Baskin. Librettist – Winner of the All-Russian National Theatre Award "The Golden Mask" Constantine Rubinsky. Stage Director – Winner of the St. Petersburg Highest Theatrical Award «Golden Sofit» Natalia Indeykina.

Francis Scott Key Fitzgerald is a writer who has announced to the world about the beginning of new age – „Age of Jazz“; he belongs to the greatest prose writers in USA in the ХXth century. His novel „ The Great Gatsby“ is a masterpiece of American literature, a symbol of „epoch of jazz“ that has become a compulsory literary work for reading in comprehensive schools and at universities at courses of literature in many English-speaking countries worldwide.

The popular novel attracted attention of moviemakers and stage directors a lot of times. The Music Hall Theatre will present an American story of attraction of the dream and its unavoidable crash in the genre of musical comedy. The spectators are awaited by the fairy show of music and dances: the rambling mix of 1920s, inimitable epoch of Art Deco and irrepressible merrymaking that borders with the fatal precipitance. The musical comedy will swirl you in the whirlwind of uncontrollable emotions where the true passion and the power of malice rule.

The subject of the performance is based on the story about the great love of Jay Gatsby, a person with ungovernable vital power, to the charming Daisy Buchanan, the girl belonging to the beau-monde who is fascinating with her gentle beauty. Just for being together with his beloved woman the ambitious main character strives for and achieves the phenomenal financial success and popularity in the society. However, Daisy chooses another man. And Gatsby, in his chase of the false dream, of the mirage loses against severe material world, and the unpredictable doom leads to the tragic final.

The story of unhappy love is unfolding on the background of magnificent decorations that are reproducing the spirit of the rebellious epoch. This is New York of „blustering twenties“ with its sky-scrapers and the „golden sea shore“ of Long-Island among villas of rich people. The elegance of the Art Deco style, the style of Celebrities, will be embodied on the theatre stage by the Production Designer Julia Goltsova. She has chosen the combination of three main colors - black, white and golden - for decorating the performance. The recognizable style elements will be adjacent to the theater conventionality. Such kind of approach will allow bringing the musical comedy nearer to the modern perception of environment, to try to find answers to „eternal questions“. Stylish costumes created by Tatiana Kudryavtseva will reconstruct the atmosphere of „American Dream“ – the inviting world of glamour and luxury of the beginning of the XXth century.

The most important component of the musical is music. The composer from St. Petersburg Vladimir Baskin, the author of music for “The Picture of Dorian Gray“ and „Alice in Wonderland“ musicals which are performed at the Music Hall Theatre, will give the feeling of lightness and at the same time of the inevitability of the fate to the spectators. The music that has experienced the true boom during 1920s and has not lost its popularity to the present day, jazz is one of the main genres in the creation of new musical performance. In the musical original jazz works will be played which have been called up by just the same time period, the rebellious and freedom-loving „epoch of jazz“.

The performance will be complemented with video installations created by Vadim Dulenko. The movies will strengthen the dramatics of unfolding events; they will add the penetrating sound to the performance. Just the video will become the visual implementation of the fate which is catching the characters inevitably.

The new interpretation of the cult novel by Francis Scott Key Fitzgerald will actualize the most important scope or topics and problems. This is the topic of love and solitude, the problem of true and supposed values, the problem of destruction of ideals and hopes of the person in the contemporary world.