St.Petersburg International Festival All Together Opera

St.Petersburg International Festival All Together Opera

St.Petersburg International Festival All Together Opera is an annual city event that has traditionally been the center of great attention among citizens and visitors alike. The festival introduces the audience to the outstanding masterpieces of foreign and national opera classics in open-air format. Admission is free. Citizens and visitors get the chance to see the most popular worldwide opera productions completely free of charge.
The idea of the All Together Opera festival is to facilitate the process of familiarization of the audience with the best creations of human spirit. Opera makes it possible, because opera, with all its tools, is the most popular form of musical art. Opera includes singers, orchestra, choir and ballet. Opera can influence people with its ingenious visual array. Moreover, opera genre has its smash hits, which, if made available, can touch people’s hearts.

The festival will traditionally open on 12 July on the Day of the Saint Apostles Peter and Paul in the very heart of St. Petersburg at the Cathedral Square of the Peter and Paul Fortress. A masterpiece by Mikhail Glinka Ruslan and Lyudmila will be performed on that day – it is a composition that is a part of the golden fund of Russian opera art. This opera is one of those works that are especially important and dear for Russian culture. In particular, Ruslan and Lyudmila is connected with two national classics at the same time – Glinka and Pushkin.

The opera will organically blend into the space of the Cathedral Square of the Peter and Paul Fortress - the heart of Saint Petersburg, - because it follows the theme of Russian history and features heroic characters; the idea of the victory of Russian weaponry is symbolically presented in it, not mentioning the fact that this opera is based on the first large Petersburg work of Alexander Sergeevich Pushkin.

Art Director of the festival, stage manager Victor Vysotsky will be the producer of the opera. The main elements of the setting will be the fairy-tale images of the Pushkin’s poem: the composition from the “Oak-tree by Lukomorye”, the towers of Kiev and stylized oriental architectural details. Production designer is Julia Goltsova. Artistic Director of the All Together Opera Festival Maestro Fabio Mastrangelo will be Music Director of the opera. The Northern Symphony Orchestra of the Music Hall Theatre. Combined choir, Artistic Director is Julia Khutoretskaya. Choreographer is Constantine Chuvashev. Leading parts will be performed by the principal soloists of the musical theatres of Russia and other countries around the world, such as Denis Sedov, Anastasia Kalagina (Mariinsky Theatre), Ekaterina Krapivina (Mariinsky Theatre) and others.

As before, amazing architectural ensembles of Saint Petersburg will open to residents and visitors of our city in a new way. This year, alongside the traditional places for staging operas, the Architect Rossi Street will turn into a beautiful auditorium.

On 15 July one of the brightest operas by Giuseppe Verdi Rigoletto will be presented within the architectural ensemble of the street and the Alexandrovsky Theatre.

The managers of the festival think that showing the Italian opera masterpiece inside Petersburg classicism created by the genius of the Italian architect Carlo Rossi is really spectacular. The street named after him is an ideal auditorium, where the bright, rhythmically harmonious façade image supports theatre performances with their musical language, as bright and as memorable, and their classically harmonious inner structures.

Moreover, the act of the Rigoletto opera takes place in the Italian palazzo most of the time, which also matches the grand festive architectural image of this place. It is quite justified to expect that the Rigoletto opera on the Architect Rossi Street will reveal the beauty of the city in a new way to residents and visitors of Saint Petersburg and make it an even more attractive tourist Mecca.

The sets for the performance will be designed with the use of architectural motifs of Rossi’s facades. Directed by the Vasily Zarzhetsky. Production designer is Julia Goltsova. The opera will be performed by the Taurida International Symphony Orchestra under the baton of the People’s Artist of the Kabardino-Balkar Republic Mikhail Golikov. Choreographers are Sergey Naryshev and Rustem Karsanov. Leading parts will be performed by the principal soloists of the musical theatres of St.Petersburg and Moscow, such as Kyrill Zharovin (St. Petersburg Opera), Antonina Vesenina (The Mariinsky Academy of Young Opera Singers), Stanislav Leontyev (Mariinsky Theatre), Elena Sommer (Mariinsky Theatre) and others. Youth SoGlasie choir, choirmaster is Pavel Teplov.
The performance begins at 17.00.

On 19 July a romantic opera of a famous German composer Carl Maria von Weber Der Freischütz will be staged in the Kirov Central Park on the Yelagin Island in front of the Yelagin Island Palace. This work is rightly considered a masterpiece of music art. This is the first German romantic fairy-tale which poeticizes the forces of nature and simple human relationships. Bright folk character of the opera makes it open for easy understanding by the widest audience.

Staging of Der Freischütz in front of the Yelagin Island Palace will blend into the space of the Yelagin Island thanks to the romantic and picturesque landscapes, and the act of the opera takes place against this background. The main elements of the setting, according to the concept of the production designer of the opera Julia Goltsova, will by the stylized elements of rural homestead – a mill wheel, architectural fragments of a homestead house, trees and flowers.

The opera will be directed by the St.Petersburg Conservatoire graduate Dmitry Otyakovsky. Principal Conductor of the Thüringer Symphoniker Saalfeld-Rudolstadt Oliver Weder (Germany) will be a Music Director of this production. Taurida International Symphony Orchestra. Chamber Choir of the St. Petersburg Music Hall Theatre led by the Honoured Artist of the Russian Federation Valentina Kopylova-Panchenko; choirmaster is Igor Pototsky.  Choreographers are Sergey Naryshev and Rustem Karsanov. Leading parts will be performed by the principal soloists of the musical theatres of Russia Mikhail Nikanorov (Helikon-Opera, Moscow), Artem Melikhov (Mariinsky Theatre), Olga Cheremnykh and others.

------------------------------------
This year the festival will continue the tradition of staging operas against the background of architectural masterpieces of the suburbs of St. Petersburg. The masterpiece by Bizet Carmen, one of the most popular and most frequently performed operas of the world repertoire, will be performed on 22 July at the Main Courtyard of the Catherine Palace in Tsarskoye Selo.

Bright personalities, quick action, captivating plot of the famous novel by Mérimée and memorability of beautiful melodies make this opera one of the most precious guests at any opera stage.

The opera will beautifully fit into the space of the Main Courtyard of the Catherine Palace with its orientation at a wide audience, marching rhythms of some themes and the place of the action, connected with squares of a Spanish city.

The main element of the performance set will be the front row of baroque arcs, resonating to the divisions of Rastrelli’s façade of the Catherine Palace.
Production designer is Julia Goltsova. Artistic Director of the All Together Opera Festival Maestro Fabio Mastrangelo will be Music Director of the opera. The Northern Symphony Orchestra of the Music Hall Theatre. Opéra de Nice choir (France). Choreographers are Sergey Naryshev and Rustem Karsanov. Leading parts will be performed by the principal soloists of the musical theatres of Russia and other countries around the world, such as Yulia Gertseva (Switzerland), Vladimir Tselebrovsky, Sofia Nekrasova (France) and others.

All Together Opera Festival traditionally presents its performances outside pompous opera theaters, amidst beautiful architecture of St.Petersburg, which becomes meaningful participant of the act. Cityscapes, created by different national schools and epochs of style, are utilized by the festival directors as natural backdrop and side scenes for music drama art.
This festival is an important landmark for tourists, many of whom build their culture program for visiting St.Petersburg with All Together Opera calendar in mind. Every year this important music event of St.Petersburg summer attracts large numbers of spectators, including Russian and foreign tourists. All Together Opera emphasizes the status of St.Petersburg as the cultural capital of our country and leaves the most positive impression in foreign visitors.
Each year this popular festival chooses the most interesting and beautiful open sites of our city for staging its performances. Encounter with great art in magnificent architecture creates special atmosphere and mood. Cathedral Square of Peter-and-Paul Fortress, Yelagin Island, Tsarskoye Selo, Gatchina, Alexander Park (in front of Music Hall), Saint Isaac's Square have hosted this festival at various times.
Renowned operas such as Glinka’s A Life for the Tsar, Borodin’s Prince Igor, Tchaikovsky’s  Mazeppa, Iolanta, Eugene Onegin and The Queen of Spades, Prokofiev’s Betrothal in a Monastery, Rimsky-Korsakov’s The Golden Cockerel and The Snow Maiden, Gounod’s Faust, Mozart’s Don Giovanni and Le nozze di Figaro, Wagner’s Tannhäuser, Rubinstein’s The Demon, Donizetti’s L'elisir d'amore, Verdi’s  Il trovatore, and also rarely performed Beethoven’s opera Fidelio were presented within the framework of this project.
Festival invites best city orchestras, choirs and leading singers from the theaters of St.Petersburg, Moscow and Europe. Famous Russian-Italian conductor and Artistic Director of the St.Petersburg State Music Hall Theatre Fabio Mastrangelo is the Music Director of this festival. In 2016, students of Conservatorio di Musica "Giuseppe Verdi" Jamie Piali and Sara Rossini were involved in Le nozze di Figaro production. In 2015, The Queen of Spades opera by Tchaikovsky was conducted by an Italian Marсo Pace. German conductor Oliver Weder also took part in this project. People’s Artist of the Russian Federation, conductor Sergey Stadler participates in the festival every year.
All festival performances feature full house. In 2016 opera performances attracted 20 thousand spectators, in 2015 - about 14 thousand despite the summer in the city having been rainy and cold.
All Together Opera music festival always demonstrates high artistic level of the performances and is justly loved by audience. The project has social and cultural focus and carries out an educational mission. Even the strictest spectator can feel the authenticity and sublimity of the experience reflected in classic music, as well as high professionalism of national and foreign performers. 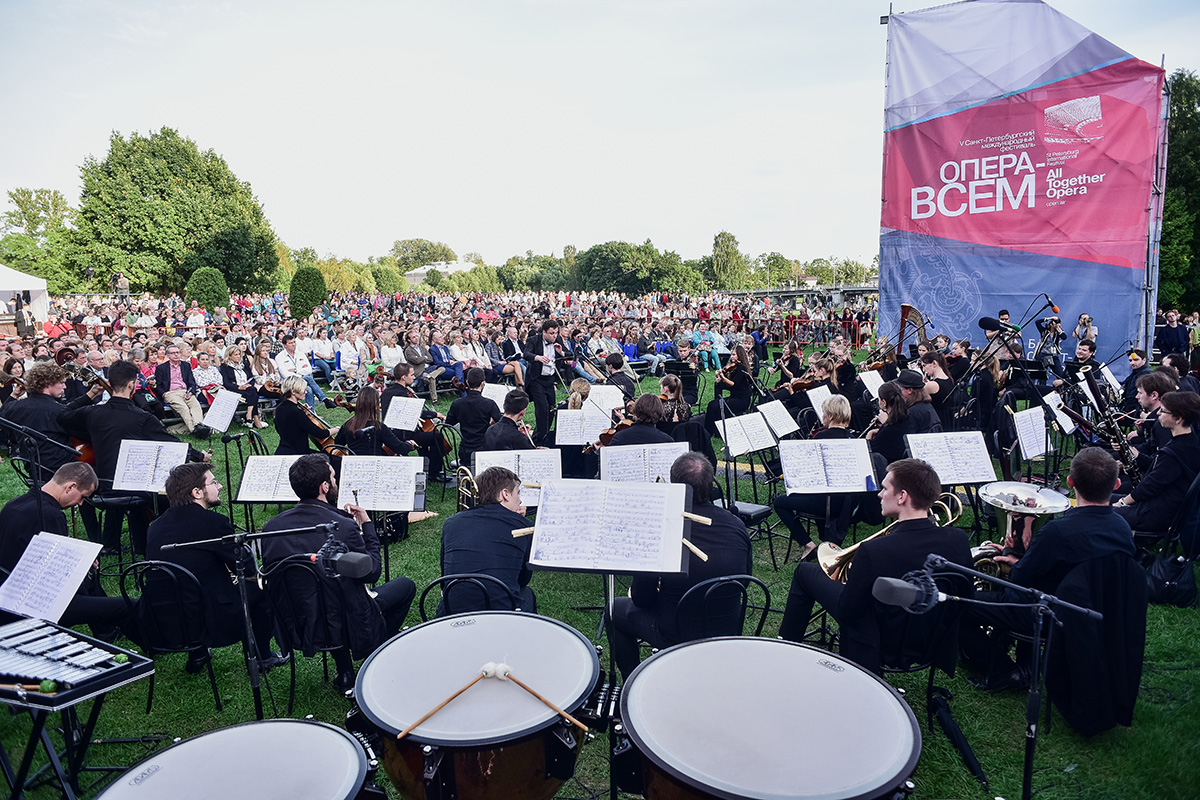 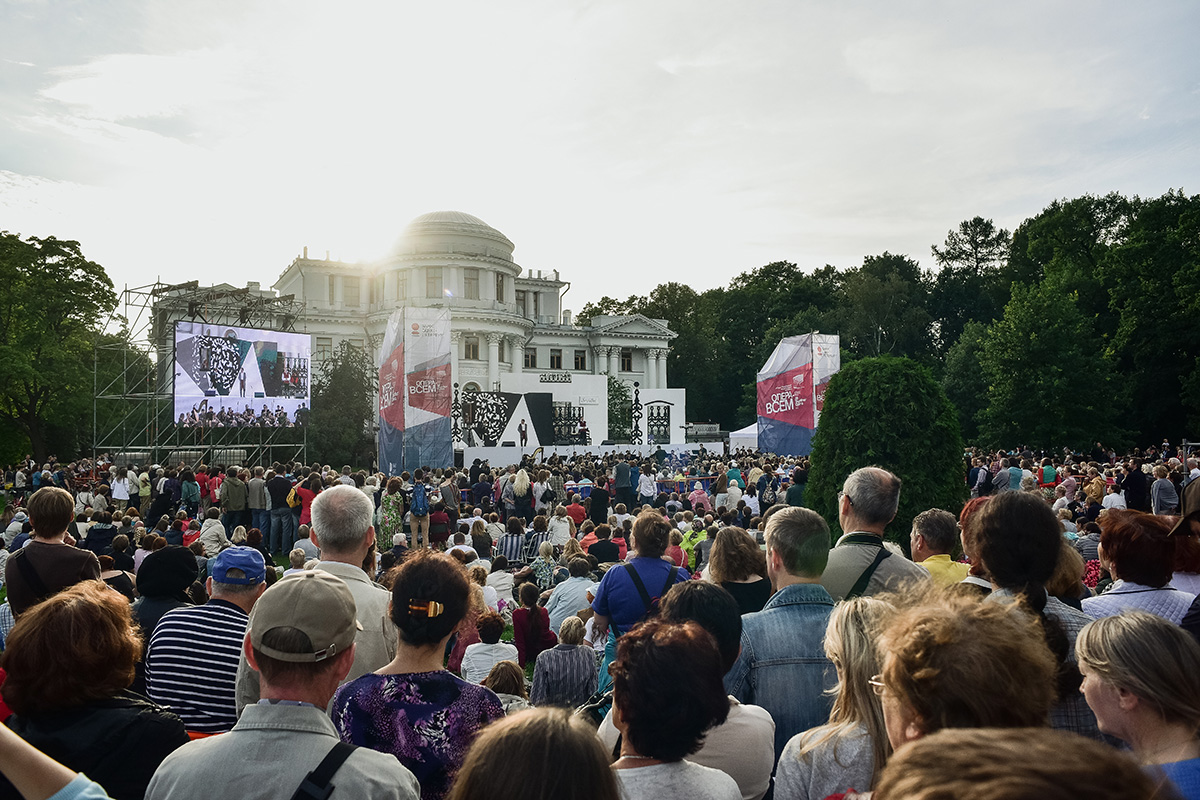 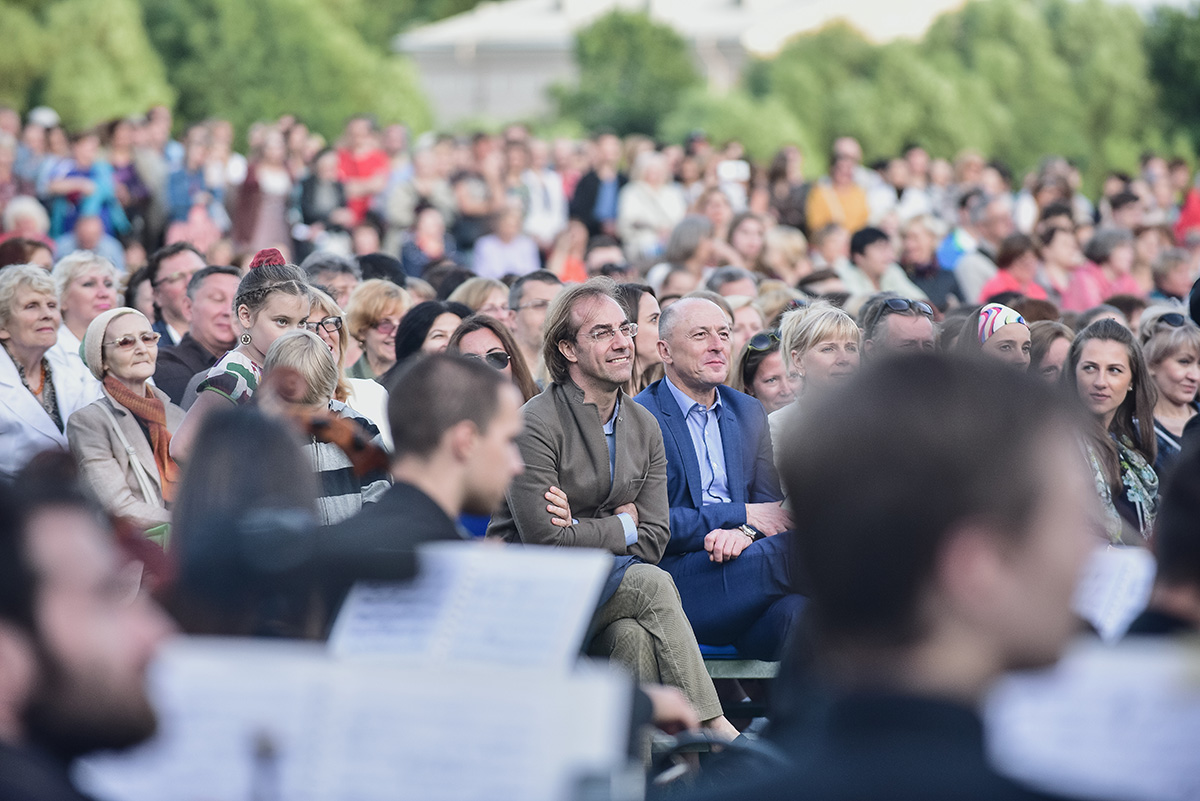 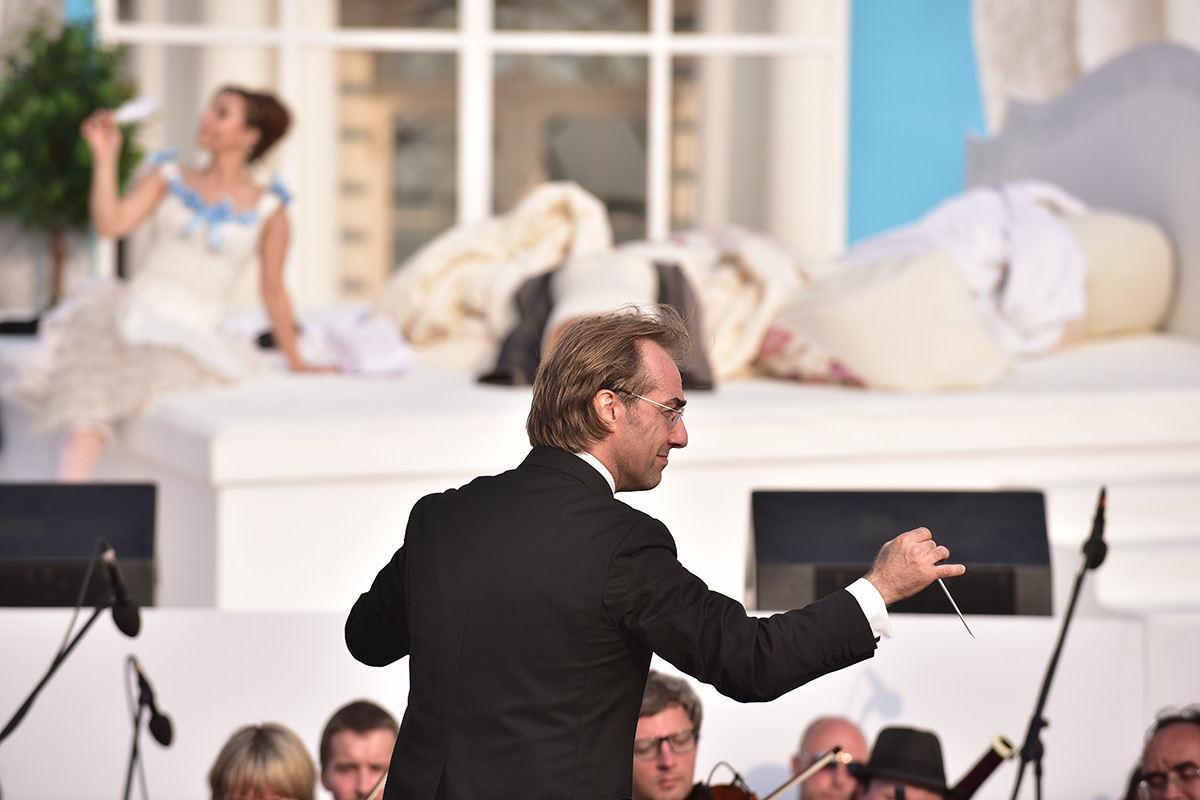 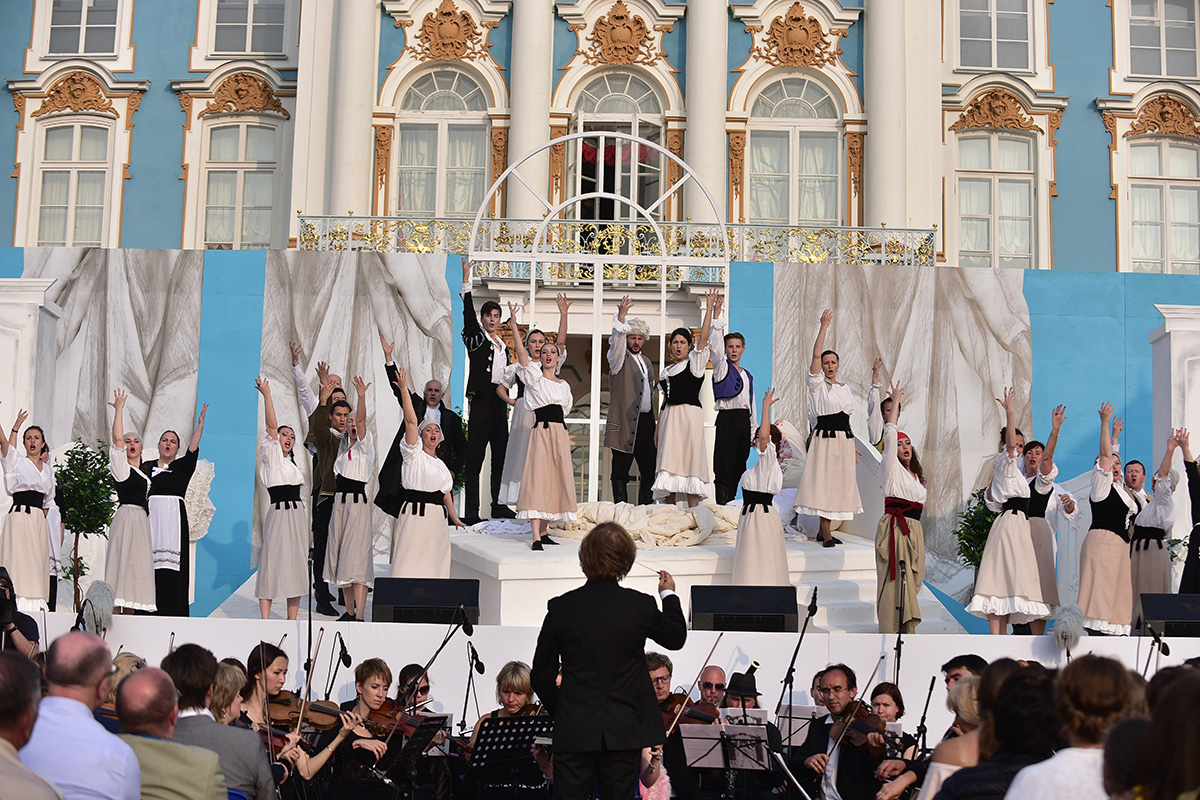 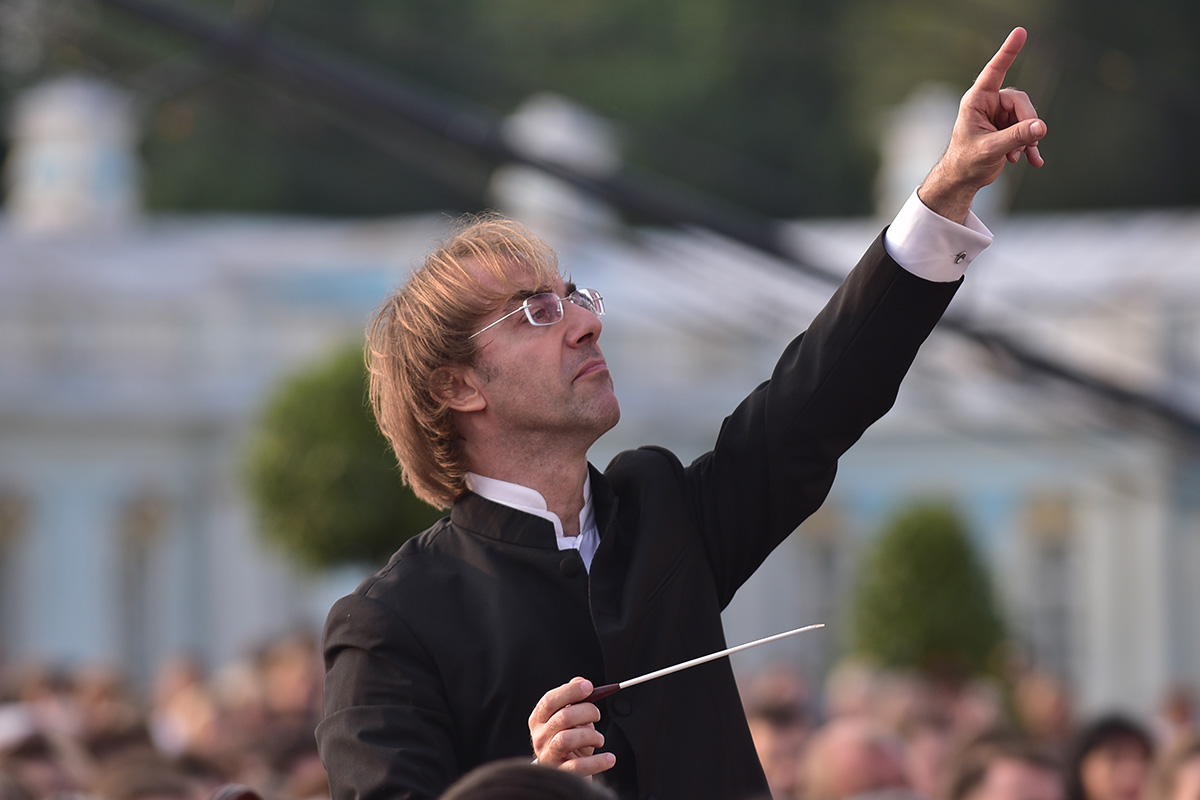 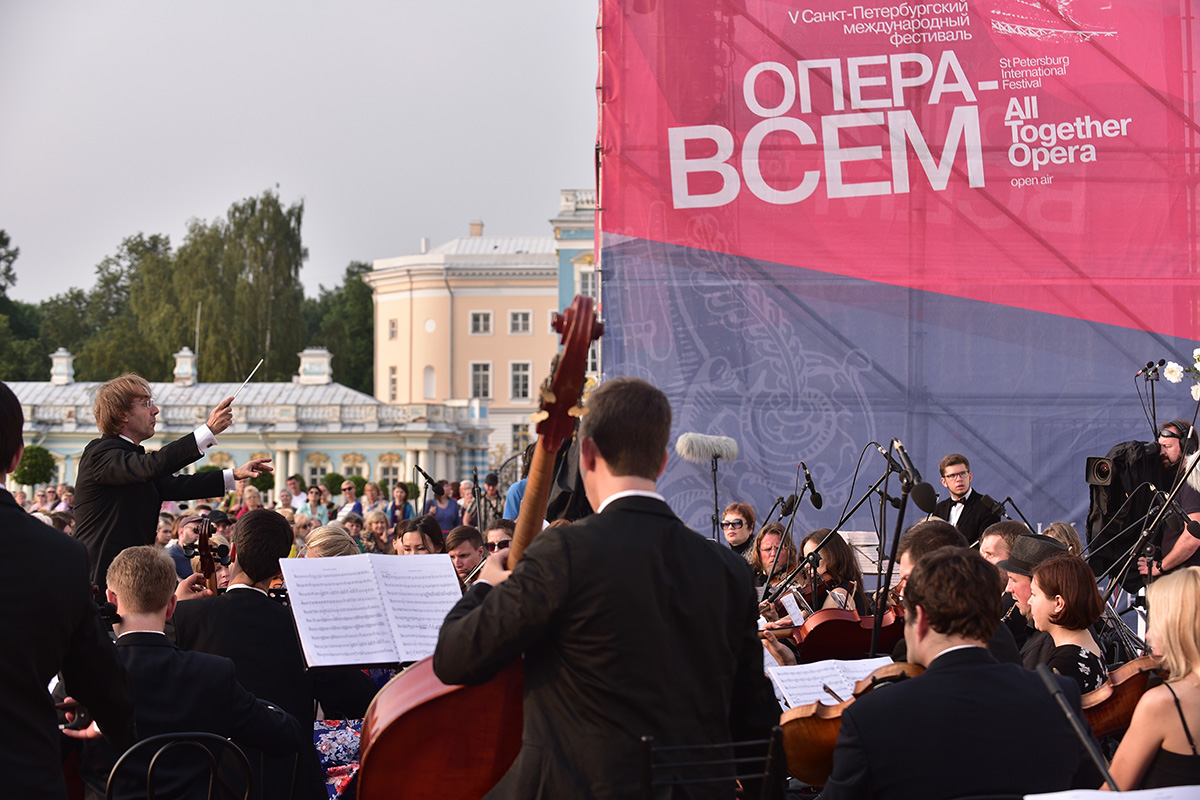 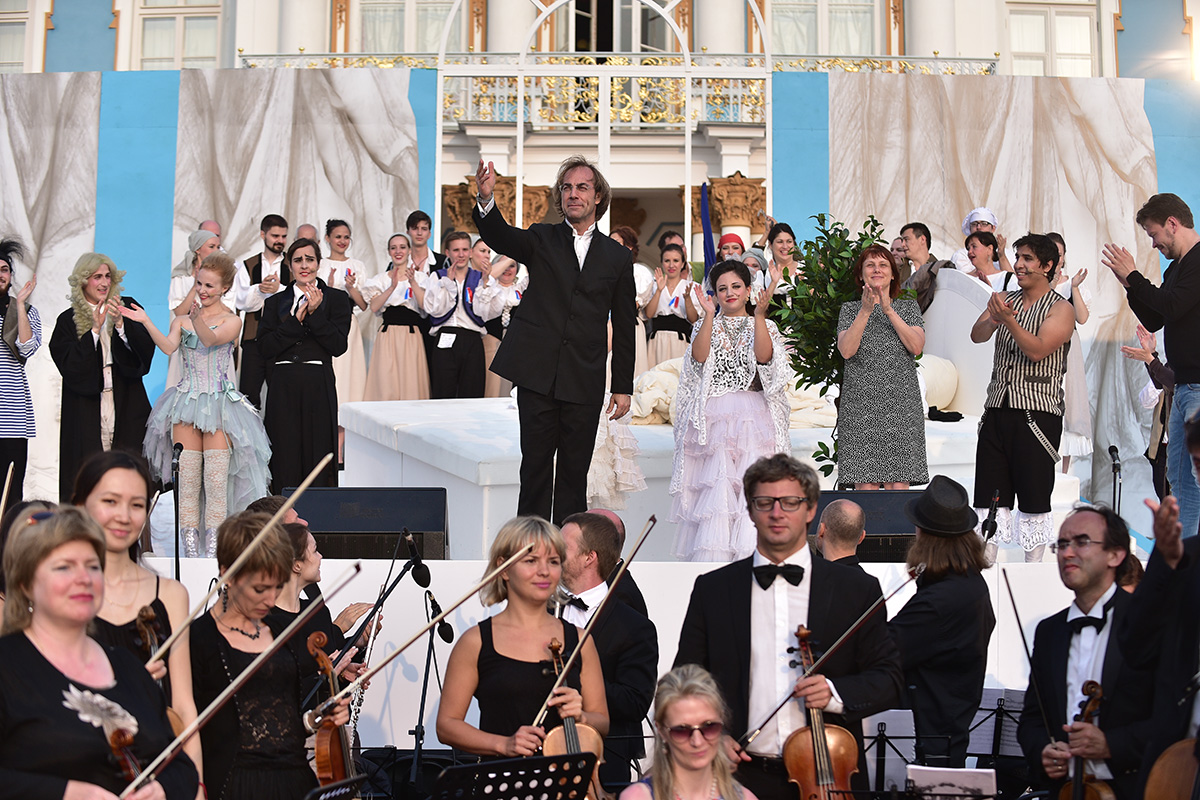