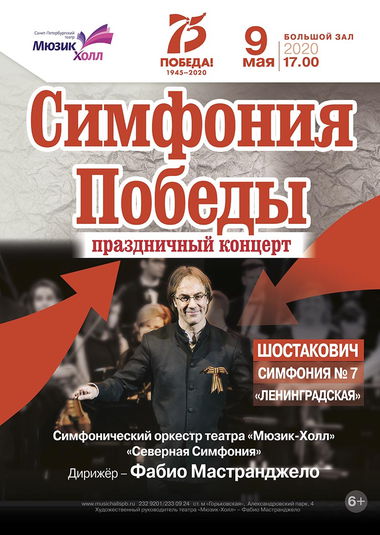 Each year of the Great Patriotic War left behind it echoes sounding in melodies, songs, symphonies... Some of them carry the joy of battles won to us, and some the bitterness of losses.

At the concert which will take place on May 9, 2020 at the Big Stage of the Music Hall Theatre, the famous Symphony No. 7 Leningrad by Shostakovich, one of the most important works by the composer, will be performed.

For the first time, Symphony No. 7 was performed in the blockaded Leningrad on 9 August 1942. The symphony was performed by the Grand Symphony Orchestra of the Leningrad Radio Committee. Some musicians died by starvation during the blockade. The rehearsals were stopped in December. When they resumed in March, only 15 weakened musicians were able to play. To offset a shortfall of orchestra members, musicians had to be recalled from military units.

A special emphasis was made on the performance; on this day, all the artillery forces of Leningrad were thrown at suppressing the enemy’s emplacements. All chandeliers in the philharmonic were lit in spite of bombings and air strikes.

Shostakovich's new opus exerted a powerful aesthetic impact on many listeners, making him cry without hiding their tears. The great music reflected a source of unity: faith in victory, self-sacrifice, infinite love of their city and country.

During its performance, the symphony was broadcast via radio as well as via the city network’s loudspeakers. It was heard not only by the city’s inhabitants, but also by the German troops besieging Leningrad.

At the Music Hall Theatre magnificent  music will be performed by The St. Petersburg Northern Sinfonia Orchestra led by Fabio Mastrangelo.