Musical for all family «Alice's Adventures in Wonderland» 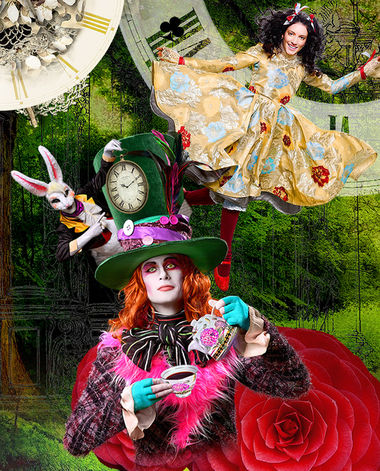 Neither young audience, nor adults could remain indifferent while seeing and listening to the brilliant musical for all family, with its unique costumes made by the well-known designer Alina German, accompanied by spectacular stage effects and catchy tunes.

The story of Alice's Adventures in Wonderland will sparkle with new colors at the Music Hall Theatre. The battle between good and evil, the confrontation between the White Queen and the Red Queen, adults' and children's worlds – all these contradictory realities will find harmony and mutual understanding thanks to the power of the human heart.

It was sunny May day, long, long ago, when one witty Englishman had told a little girl an intricate story. More than 100 years have passed since then, but this tale has remained attractive to the children from all over the world, although it seems that at present it’s not necessary at all to run after the White Rabbit in order to be lost in unknown - it’s enough just to find a television remote control or to get online.

But what’s so special about Wonderland? Or may be about Alice? Our performance is an attempt to find an answer. It’s also a reminder that even in a modern world, where reality and fiction, true and lie coexist, where they are intertwined and sometimes mixed up to please unfair gamblers, there is room for true wonders, love, hope and dream.

Unique sets made by the well-known artist Petr Okunev fully recreate the fantastic world, which Lewis Carroll described in his «Alice's Adventures in Wonderland», and will help an audience to be deep in magic.

But the most important part of a musical is its music itself. The gifted composer Vladimir Baskin has created beautiful melodies which undoubtedly will become very popular among young audience.

Unbelievable phantasmagoric costumes by the St.Petersburg fashion designer Alina German will add a special charm and a bohemian element to the performance.

So many colors and mysteries, so much good and beauty are kept at Wonderland, which is well-known but at the same time personal for everybody!